People Magazine Blog: Am I Raising a Liar?

People Magazine Blog: Am I Raising a Liar? 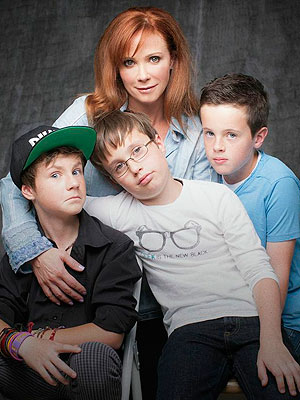 After her hilarious first blog, we just had to welcome back Lauren Holly for a second installment!

Best known for her roles in Dumb and Dumber and on NCIS and Picket Fences, the actress, 49, is currently starring on ABC’s Motive.

In addition to her acting career, Holly is also mom to sons Azer, 11, George, 10, and Henry, 9, with husband Francis Greco.

Keep up with your favorite celebs in the pages of PEOPLE Magazine by subscribing now.

In her blog, Holly recounts the mystery of the disappearing soda and fears she is raising a liar when none of her boys confess.

Honesty. We all want our kids to be/have it. How do we teach it? It is at the core of being a good person. Adults all know this. Ask any person over the age of 35, and they can tell you that the best people in their lives are honest ones. It’s a quality that always seems to be accompanied by others as equally positive traits.

Bear with me in the labeling of “adult” as anyone over 35 — every 17-year-old reading this probably moaned loudly at that one. (So close! But I’ll be even able to vote!)

These days, maturity seems to come more slowly. Personally, I blame it on all the societal coddling. We are raising kids who have no idea how it is to lose, as “everyone is a winner!” That really bugs me.

Some of my biggest leaps of growth came after stinging defeats. I think it somehow makes kids feel more entitled, less ambitious, less respect for a work ethic. Therefore, it takes longer to build a wealth of life experience — and those riches in one’s possession are how I measure being an adult.

Anyway, dealing with an honest person along the way is always pleasurable. They are our heroes, and ultimately, are whom we always want to win.

As a mom, I want my boys to be members of this elite group. I want them to be men that people look to with respect. It was the missing soda that made me think I might not be teaching it.

There was a crazy night of movie fun and junk that I approved of. I was away working over a weekend and I wanted them to have fun. After gorging themselves, there was a six-pack of soda left. Their nanny took it to her room. She knew better than to leave it in the fridge. With three preteen boys? Gone before lunch.

Maybe I’m overreacting, but I have a pretty hard time with my kids drinking the stuff — for so many reasons.

She told them to keep away from it. Every day after, one soda disappeared. The first day she thought maybe she had made a mistake. The second day she knew someone was taking it. She asked each of them in private. All said no, it was not them.

I came home on the third day a soda was missing. She still did not know who was the thief. At dinner that night, I asked all of them to confess if guilty. No one did. I took each in private. All claimed and professed innocence. Even worse, I believed them. So did their nanny.

Usually I could spot the signs — unique to each of them — of lying. This time I couldn’t. I was so distressed. Who had learned to lie so well that they fooled their mother? What would become of him?

Now, I don’t think my reaction was exaggerated. A liar at this age had a greater likelihood of going down the wrong path. You are, really, who you are hanging around with. Who would be friends with a liar? Sketchy types, for sure. If they were this good at it, they must have been practicing. What else did I not know?

I began to question my methods.

BY EXAMPLE: Huh. Not so good. They’ve heard the story I even shared with you all before — wrecking the one side of my parents’ Plymouth Valiant because of driving hijinks and not telling them until years later.

I’m an actress. I am dramatic. A certain flair (of exaggeration) is expected. I pride myself on storytelling. Did it really matter if I was playing a character? Kids do what they see.

Or, did they notice when what I said maybe wasn’t the complete truth? Was it understood when I only was trying to spare someone’s feelings? Could they separate the nuance from the core of truth I was trying to teach?

BY REWARD: Surely I told them enough the premium I put on telling the truth. Punishments were not as severe if one came clean. No matter how bad it was, I promised to make the consequence not as bad if they suddenly told me the truth.

Okay, so what then would happen to them for lying?

BY CONSEQUENCE: The rule was if you lie, you were in the biggest trouble of all. Wow. Looking at it now seems like I was just creating the super liar. Anything would be said and stuck to not to get caught.

You get my point. I was spinning out, trying to figure out how it came to be that I had raised a stealthy soda stealer. That one of my beloved angels was probably gonna end up in jail because I wasn’t teaching them, well, to be honest. It was going to be a sleepless night.

Then it occurred to me. Yes, I had dented my parents’ car, but I had worked like the devil to fix it quick. I repaired the gardens and mailboxes I hit. Were my parents really harmed for not knowing at the time? Not really. Was I spared from any difficulty in leading my life? Most definitely. Even though I was guilty of that subterfuge, did I know the difference between right and wrong? Yes.

Would I lie to the detriment of another? Would I break the law? Lie for my personal monetary gain? No. No. No.

So, maybe there is a bright spot in this current dilemma. It could be that all my hopes of respectability are not lost. Maybe my example of basic goodness is enough? That the flaws in my lessons are small enough to not hide the jist?

Maybe it is still reasonable that my boys will still grow into being good men. I guess the stealer of soda was spared some indignity, some embarrassment from my wrath.

They all brushed their teeth. I’m betting no soda ever goes missing again — maybe that is enough.

Still, a lie was told. We should talk about trust.